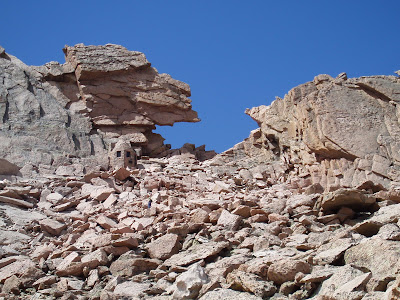 The Keyhole on a bluebird day 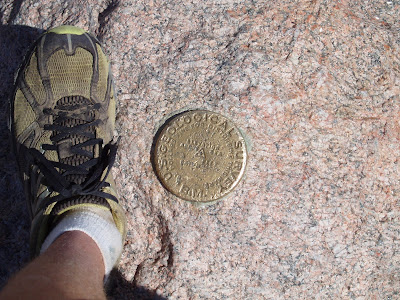 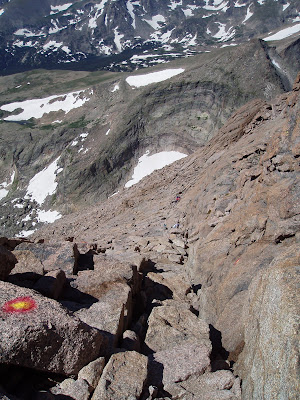 Looking down the Homestretch 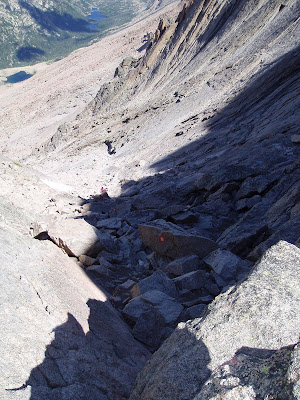 View from the top of the Trough 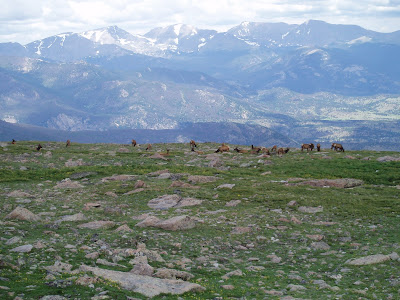 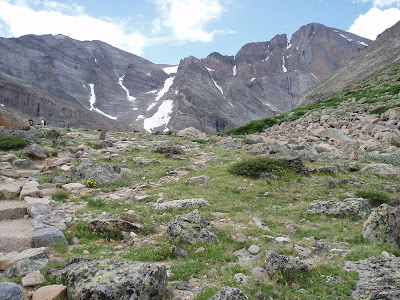 This morning I went to Longs Peak to attempt the FKT for the Keyhole Route roundtrip. On July 27 I did a recon trip and snapped the photos that accompany this post. The existing FKT (that I know of) for the Keyhole Route was run by Bill Wright in a time of 3:35. He went up in 2:05 and down in 1:30. Here's a few of the links I found while researching: This one and this one. Since this record occurred in August of 2000 there is a strong possibility that during the last 11 years someone has run a faster time that was not recorded in a public forum. Let me know if you know of a faster time.

Start/Finish Line- I started my watch in front of the Ranger Station where the paved sidewalk ends and the dirt trail begins. I have used this line for all my runs on Longs. For this route I stay on the trail the entire distance top to bottom- no cutting switchbacks to obtain a faster time. My watch ran continuously from beginning to end- no stops on summit/pee/eat/etc.

Comparatively to my run on July 27 I was faster at all splits except from the Keyhole up to the summit. My July attempt was done in 32 compared to the 34 today. I encountered a conga line of 8 hikers shortly after the Keyhole. I tried a parallel line beneath them but found myself traversing exposed slab so I retraced my path until I could get above them and proceed without traffic. Lost at least a minute with this decision. At the top of the trough I waited another minute while hikers descended the crux. This area can bottleneck very quickly! The narrows went smoothly as I could easily pass on either side of anybody. The homestretch was a zoo- I weaved in and out of 20-25 people until I reached the summit. I ran and tagged the Geological Survey Marker (official high point?)on the rock that has the summit register below it. I then descended through the masses once again. After the homestretch I was free and clear back to the Ranger Station. I could easily move around people through the narrows, down the trough, and through the boulderfield. Between route congestion and a routefinding error I lost an estimated 3-4 minutes. Not bad. One of the challenges of this route is the sheer number of people on it at any given time. If you are going for speed don't do it on a weekend or holiday! In 2009 I made this mistake and counted over 70 people that I passed on my ASCENT. This year I tried it on a Wednesday and a Thursday- starting between 8-8:30 and still encountered plenty. I think the best approach would be to start on a weekday around 3-4 PM with good weather. Minutes after finishing I went into the Ranger Station and asked if they knew of any faster times for the Keyhole route roundtrip. They didn't but were excited to hear about my run. I gave them all my splits which they wrote down along with my name, city of residence, phone number, and blog address for future FKT questions/inquiries. They were then going to forward the information to park information headquarters. They also mentioned that one of the climbing rangers is training to break the FKT roundtrip for the Cables Route. Apparently he is within 15 minutes of the record from his last attempt.

Here's what I brought with me:
1 20 oz. bottle of Nuun. Stashed the empty bottle at the Keyhole, picked up on my return and stored in the back waistband of my shorts for the descent.
1 package of Clif Bloks- ate 4 of the 6 before the keyhole, the last two after I finished.
Mountain Hardwear Geist Jacket tied around my waist- just in case.
Car key in back shorts pocket
Montrail Rogue Racers
Socks, Montrail hat, sunglasses, Mountain Hardwear shirt and shorts.