Black Canyon Ascent and the Return of Mr. Parr!!!

First off I want to send a BIG THANK YOU to RD Scott Shine, the San Juan Mtn Runners, Black Canyon Nat'l Park, and the Montrose Community Foundation for their collaboration in putting together a fun and family oriented event in the BEAUTIFUL Black Canyon of the Gunnison! It is a rare gift to be able to put on a race in a Nat'l Park and I'm grateful for the partnership that has been established over the past 3 decades to make this race come to life.

2010 marked the 35th running of this classic 6 mile road race which boasts over 2000 ft of climbing as you ascend to the canyon's rim after starting at the Hwy 50 and Hwy 347 Junction. It was a fun ride as I carpooled with Liz and Scott Drum down to the race. After checking in we headed out for an easy 20 min warmup jog and saw "someone" warming up quite fast as we were returning to the starting area. Once we got closer we knew it had to be Timmy Parr. He had the bounce in his step as we extended our warm up and cajoled with each other for a few more minutes. Tim's past two races have not been run in Timmyesque style and I predicted he was due for a win and possible CR. Today was his redemption race!

At 8AM the "gun" went off. Tim looked forward and floated through the course with ease. A local Montrose runner tried to hang with him...briefly, followed by Masters legend Bernie Boettcher, US Mtn Running Team Member Brandy Erholtz, myself and Scott. It was amusing to find the pace I needed to run hard yet not blow up on a short uphill race. I settled in behind Brandy figuring she was running a good pace to gauge myself on. Initially my strategy was to break the race in thirds; with each third being slightly faster than the previous. Needless to say I chucked the strategy out the window and simply ran by intuitive feel. Coming into the race I figured I would run around 45 min or so- 7:30 pace going uphill.

At mile 4 AS I began to feel the strength from my training of running Signal Peak most M-F mornings which gives me about 1500 ft of vertical to the summit from my front door. At this point I passed Brandy and tried to calculate if I could reel in the local Montrose runner sitting in 3rd who began to sense my presence and began looking over his shoulder every few minutes. I also instinctively knew that Scott had also past Brandy and was not far behind me...the last 2 were going to be a shoot-out!

I picked it up and slowly gained on 3rd. However, it was not enough as he had enough in the tank to also have a strong finish. With 1/4 mile to go I looked back to check the status on Scott who was about 10 seconds back. Nothing to do but put the head down and charge to the finish! It's always fun to sprint into the finish no matter what the distance- that line always brings a smile to my face. Here's the "rough" results:

Gunnison runners claim spots 1, 4, and 5! I'm truly thankful to run with Scott, Tim, and Duncan on a regular basis. Our training together motivates each of us to do more than we could alone. I could not have asked for better training partners and more importantly friends when Megan and I made the move in mid January. Here's to Gunnison Endurance!

After the race Scott, Timmy, and I ran a few cool down miles on one of the rim trails that had truly inspiring views of the canyon! Simply dramatic! The post race was first class with delicious breakfast burritos and healthy refueling options graciously provided by Natural Grocers. It is always a treat to run races that partner with sustainable causes and healthy living companies and practices. A mini theme of the day was my prediction accuracy...
1. Tim Parr would win and come close to the CR- yes!
2. RWB would run around :45 min- yes!
3. Scott Drum would win a pair of shoes at the raffle- heck yes!

As I forgot the camera once again I leave you with a parting shot of the "functional award" that was taken upon returning to la casa de burch...BTW functional awards are so much more appreciated by me than the ones that collect the dust... 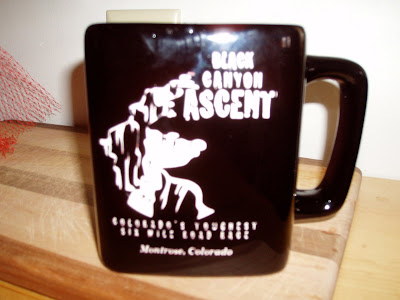 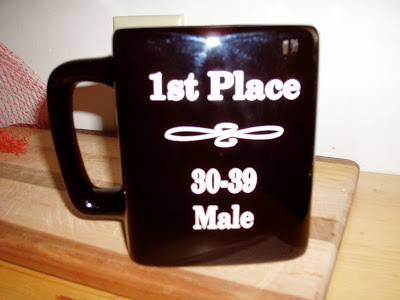 I forgot to mention...next Sat. will be epic at Jemez! I'm really want Karl and Sr. Clark to be at full health for this one. It's going to be a burner with Dakota, Nick Lewis, and a number of dark horses to spice up the mix! I cannot wait, 50 miles of adventurous terrain with lots of climbing and FUN technical downhill sections! Besides, my back is up against the wall. I need the A game to continue the race series with Sr. Clark! If I beat him the drama will ascend at Pikes. If I go down 0-3 I'll be treating him and the fam to dinner in Los Alamos most likely....:) Until then I'll be watching Rocky movies and jammin out to Eye of the Tiger!
Posted by burch at 2:23 PM 3 comments:

After the Fruita 50 I wanted to put in a solid effort at CP. The question was, at what distance? 50 milers are my favorite distance to race. With that said I want to have my best 50M performances at Jemez and Lake City. Thus I chose to run the 25M at CP. After consulting with DC, TP, and Dr. Drum I realized the benefits of running the shorter race to benefit me at my next two 50's. It would give me a mental and physical break from the 50M distance as I've already raced two this year. Mentally going into the race it was much easier knowing all I had to do was run hard for 3 hrs and change. Physically, the recovery was much shorter than it would be from the 50. I felt like my 3 weeks of training after CP before Jemez would be stronger than racing the 50 at CP, recovering, and then getting back to full training. Dr. Scott called it my "25M tempo run." It was good to switch gears for the shorter distance and get some positive turnover.

The race was super fun. Matt Turnbull and I leapfrogged for the first 18M. At mile 18 AS the course begins to drop significantly. Knowing downhill running is my strength I let it go and was able to get the W. I was pleased with the effort. I wanted to see if I could run sub 3- I believe only Justin Ricks (CR 2:57) and Bernie Boettcher have gone under 3 on the new course which began in 2004. I ran 3:05- it will be fun to race here again and begin to widdle away at my current time.

The post race was awesome! It was so fun to be a race spectator- I hardly ever get this chance to hang out and wait for the long race to finish. Bill Dooper and I had some great conversation as the 50M unfolded. Henshaw ran his 25M split in 3:17; I told Bill he would set the CR in 6:45. My prediction was close as he stormed through the line in 6:52. Great to catch-up with former Fort Collins training friends Bryan G and Corey H. This year has been great to watch the new crop of ultrarunners that will impact the sport in big ways. I've been thoroughly impressed with Dakota Jones and Andy Henshaw. Keep an eye out for Marco Peinado and Dylan Bowman as these two are learning and improving with each race. These young guns are also great people to chat with and get to know.

This Saturday I really will be changing gears as I run the 6M Black Canyon Ascent. This is a classic western slope race that has seen some solid runners toe the line. I am stepping outside the comfort of running ultras and giving it a go at this sprint distance! I'm looking forward to seeing what kind of octane is in the tank as I will be running much harder than I'm used to. Tim Parr, Scott Drum and I will represent the Gunnison contingent...Duncan got a little intimidated when he saw my quads at the track last week...) Was it the frightening color or the muscle? It will be a hard effort with over 2000 ft of climbing, a great tuneup before things heat up at Jemez...I'm getting pumped up!

The Gunnison crew has finally started our track workouts the past two weeks. These have been a blast! My favorite is the 200M ZOOMS that we run to finish each workout- these are basically 100M at 75% with the last 100M being at 95-100% max sprint...I'm feeling a little like Usain Bolt's slower adopted brother! Duncan and Scott lit up the track last week as we ran 12 400's with 45 sec recovery between each effort. Duncan ran a 62! for his last lap...look out for him as he focuses on the 100M this year. I am super stoked to see what happens for him at Bighorn.

Last week I also received an email from Matt Carpenter informing me of my competitive entry into PPM! This was great news to hear as I expected to get an answer sometime in late July. Clark, are you confirmed? I have really enjoyed running at new races this year and am especially excited for this classic colorado mountain test of fitness. As of late my energy levels have been solid as I've ran 90+ mile weeks 3 of the past 4 weeks-this is my first year running consistently more than 70 miles/week and the body is responding wonderfully to the higher workload. It always cracks me up when I begin to think I'm running a lot and I ask DC what he ran for the week...soon when I say 90 he'll say 180! It's still hard for me to wrap my mind around weeks above 140-impressive! This past weekend I ran a 20M and 21M. This was solid...now imagine running that 7 days/week with some of those days being longer....Duncan likes running...

Last but certainly not least...

My wife Megan is currently climbing Mt. Rainier! It has been awesome to see her following her dreams/goals in the mountaineering realm. She runs long to train with solid finishes the past few weeks at Fruita and CP! Climb hard, be safe, I love you! 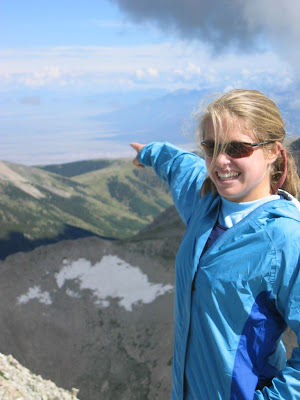 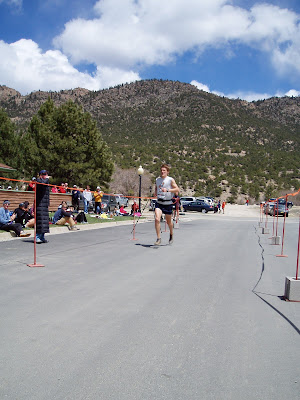 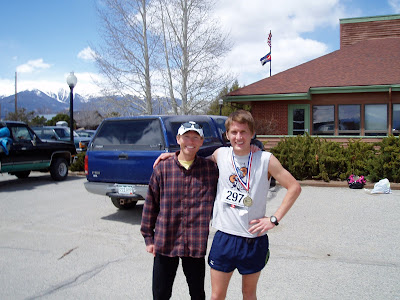 Andy and I - All smiles after a fun day in the BV hills! 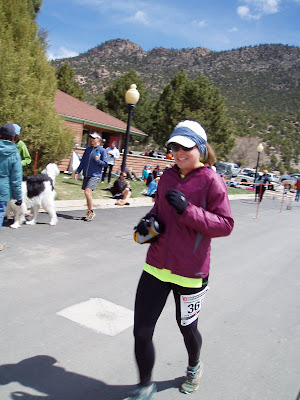 Megan finishing strong in the 25- Another solid "training race" as she prepares for Mt. Rainier! 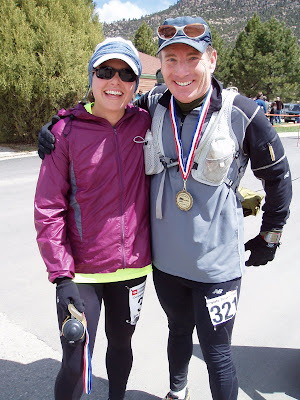 Megan and Ed Turner- Bright eyed and bushy tailed in the CO sunshine- did they really just run 25? 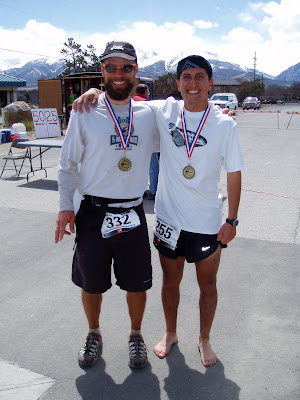 Bryan Goding and Marco Peinado- their finish times suggest they ran that close to each other all day! 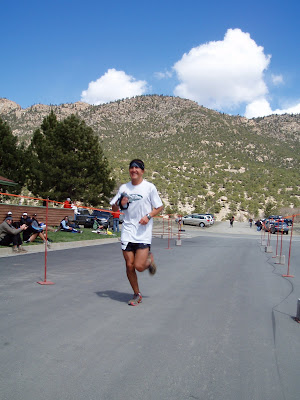 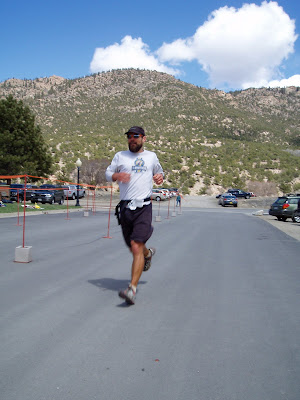 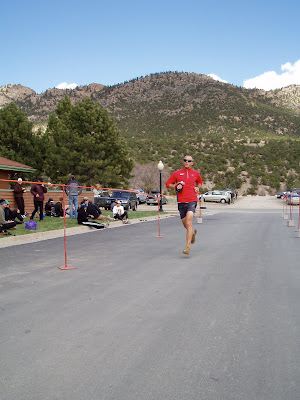 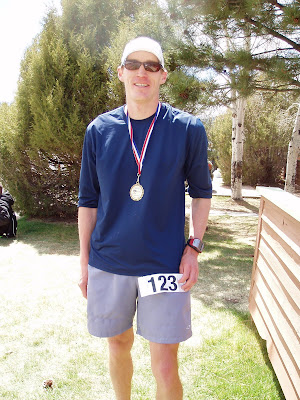 Tim Hoppin- improving with each race he runs. Tim hit the jackpot and won a raffle entry into Western States! He will be joining a strong Colorado contingent of contenders at the Big Dance! I will be rooting for Krupicka, Clark, Henshaw, Hoppin, and all the other Colorado runners who toe the line at the "Boston of Ultras"
Posted by burch at 7:40 AM No comments: