A Trip to the American River 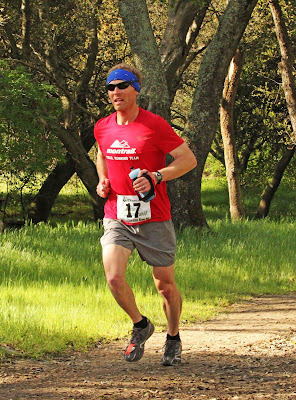 This past weekend was a whole lot of fun! The 2.5 days in Cali felt like a week of warm sunshine refreshment. I'm really pleased with the race and fond of all the positive memories that highlighted the trip. I flew out to the race on Friday with my PI brothers- one the clean cut and self-proclaimed "Deano Latino" and the other wooly mammoth known to AJW as "Big Boy." After arriving in Sacramento we cruised the 5 in a Prius...not that this has any significance other than the fact it took us a few trys to figure out how to turn the darn thing on! More like riding in a space shuttle in the early going accompanied by a crazy sounding GPS navigational voice...

That night we got fueled up at the pre race meal. The cheese tortellini was amazing; probably a little too amazing...more on that in the race report. Anyhow, during the day the three of us talked race strategy and pacing and overanalyzed too many factors when thinking about the 50 miles we were to cover the next day. While MC'ing the panel during the dinner AJW brought it all back into perspective, "Tomorrow you're gonna run from Sacramento to Auburn." It's sound advice- SIMPLIFY!

Race day started a little after 3AM on Saturday morn. We hopped on the bus and arrived in Sacramento 1 hour before the start. A big thank you to RD Julie Fingar who kept us and some others warm before the start in a nearby office. On our way I was convinced we were looking for a warming hut...it was early...

As predicted the race started faster than any ultra I've been a part of. I did my best to find the fastest pace that wouldn't create any blood lactate in the muscles. For whatever reason my Garmin battery magically died the night before even after a full charge before the trip. This turned out to be a good thing- I simply ran by intuition. I ran in a mini peloton of 5 guys- one of which was Jacob Rydman. I found this out as the local received many GO JACOB encouragements along the beginning stretches of bike path.

Around mile 13 Jacob picked up the pace. The other 3 guys followed while I stayed at the same pace and began to find myself in No Man's Land. In many ways I like running by myself in a race so this turned out to be a good thing as well. I watched as the pack of 4 started falling off Jacob's pace one by one. Two hours in and that cheese tortellini caught up with me. A quick stop and I was back in rhythm. I then began to pass the other runners in the peloton that had been separated by Jacob. Around mile 20 I was surprised to pass Jacob who had looked so smooth on the pavement. Evidently his quads had burned out.

I went through the marathon 10 ticks before 2:55. This is the 3rd fastest marathon I've ran in my extensive road marathoning career :) Finally I hit dirt! Once I was on the trail I felt like a new man! On the pavement I built up plenty of aches, tightness, and yearning for a natural forgiving surface. American River is like eating a lot of mashed potatoes followed by a grand dessert! The bike path miles were bland and consistent. You knew you had to clean your plate though to get dessert. It was tasty! I loved changing up the muscle groups, going uphill, going downhill, and cruising along the rolling sections. At the AS at 35 I passed Deano Latino who said Senor was just a few minutes ahead. 15 miles to go and I was feeling good. For some reason the gels went down better during this race than any other. It was by far the most gels I've had in a 50M. It was solid and consistent energy all day! I pressed on wondering if I'd see the backs of any more runners.

When I got to the last AS at 48.5 I did a triple take as I thought I saw two Tony K's hanging out together. It was funny how closely they resembled him; the hair, beards, tan, and shoes were spot on! I was really psyched to see the last two mile markers come and go with relative ease. A glance at the watch and I kicked it into gear to go under 6:10.

The post race was also exceptional! Veggie burgers, music, and good people helped recharge the battery. It was fun to meet and chat with many of the Montrail Team for the first time. Congrats to Greenwood, Skaden, and Perry for their impressive finishes! Dinner that night brought together good laughs, good people, and good food! The next morning we got out on the WS100 course. Ran out to No Hands Bridge and back from the track with Perry as I wasn't feeling as spry as my older counterparts...fun to watch FastEd drop the hammer down the home stretch on Clark! Prophetic? We'll soon find out. Ladies and Gentlemen the time is now!
Posted by burch at 5:57 PM 6 comments: