Just a quick update to check out the following on March 1st:

1. Montrail will be launching their new website! Be sure to check this out- it will feature an e-commerce platform that will allow a direct sales channel from Montrail to the customer online. http://www.montrail.com/ You can also browse the new and improved product pages, and find a plethora of info regarding Montrail, its athletes, and much more.

2. Registration for the 5th Annual Run Rabbit Run Steamboat 50M will open at 7 AM MST. I anticipate it to fill very quickly and there is only 190 spots. I will make it 5 for 5 and toe the start line once again this September 17!
Posted by burch at 4:57 PM No comments: 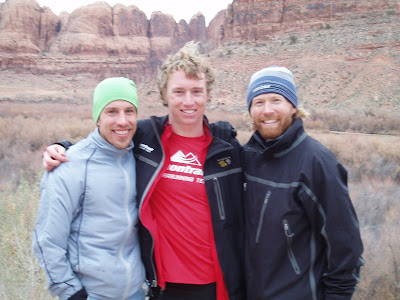 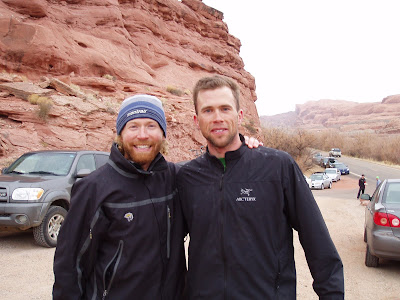 Results,just in case you haven't seen them yet.
At noon last Friday I hit the road with my neighbor for our date with the desert. Seven hours and a few thousand calories later we arrived! This year I was to be treated with some wonderful local hospitality as Mrs. Jones welcomed myself and a few other runners and their kin to share a roof and some time with her favorite son. 2011 was my 5th time to the Red Hot; 4 as a racer, and 1 as a supporter. This however was the first time that I slept indoors before the race. Needless to say, the comfort of a bed and a regulated heating system made me feel quite pampered.

After a solid night of rest it was off to the race. As I drove to the start my in car thermometer read 50 degrees. It was warm and windy. Once the car was parked, the precip set in. A mix of graupel, rain, and other related water derivatives made their way to the sandy, red, desert floor. I needed to put on the tough face as I thought about stripping down to shorts, t-shirt, arm warmers, and gloves. After discussing "best" clothing options with half a dozen friends I chose to also put on the Geist Jacket which turned out to be a wise decision.

The race began and the excitement was palpable. The gun went off and the thundering herd began its journey. A large pack stormed forward. On the first descent I put in a mini surge to see who would follow. After about 2 seconds in the lead I triggered what can only be described as pissing off a bunch of bees that instantly began to swarm and overtake me. As the grade turned flat, Mike Smith (2:15? marathoner) made one of the most convincing moves I have ever witnessed in a race and put a sizable gap on the rest of the field. Parr and Jones cautiously reacted and the chase was on.

Until about mile 8 I found myself in the eight spot. I began to chip away at the fast start that propelled Jason Koop, Dylan Bowman, and two other guys I didn't recognize. It was nice to chat a bit with Jason and Dylan and recognize that a marathon was still in front of us. Koop was looking solid after an early season CR win at Ghost Town but would later have to drop due to a knee injury. D-Bow and I kept at it and reeled in the last two guys that trailed Jones. The fun began with the first of many twisty descents that allow the turnover to rapidly increase. At this point I still had a visual on Dakota but his red coat was beginning to disappear as the slickrock drew nigh.

Up until mile 24 Dylan was anywhere from 1-45 seconds behind me. I knew I would have to push the remaining descents fast as he would gain ground on the flats. I would steal a glimpse back every 15 minutes or so hoping he would be out of view as the race dropped into some of the slickrock washes. As I began to pass some of the 33K runners they said I was in third. How could that be? They must have just miscounted...However in the back of my mind I remembered that this course is not often kind to first timers. Many fast and accomplished runners have gone wrong on this course. Parr and Jones know the route, that left Mike.

During the last few miles I let the pull of gravity guide me to the finish line. 4:12, a 4 minute PR for me at this race. I then got the update from Parr that Mike had dropped after taking a left turn instead of going straight, thus repeating the first initial loop. Had he gone straight a new CR would most likely have occurred. This is trail running and these things happen. I have been off course enough times to know.

Post race was good times as usual. Great to catch up with my long lost brothers from Gunnison and so many enthusiastic, fun loving folks. Fun to see Young Money aka Hollywood aka H-Dub (my personal favorite) win one in his backyard with the support of his mom, aunt, uncle, and many friends to cheer him on and heckle him a bit later that evening..:)

1. Would the race outcome have changed if Parr brought a bottle and ate more than 350 calories? This is one area that I am working on improving as I look towards 100's. You can fake it in a 50K and a 50M- but that won't work for 100M. DC has witnessed the caloric deprived monster I turned into at GM 100 last year. On Saturday I ate 500 cals and drank 2+ liters of water. I need to eat more.

2. If there were no 15-20 MPH headwinds would the course record have been broken?

3. If Mike Smith ran the course clean what would his time have been?

Later that evening, back at the ranch, I chatted it up with Bryon Powell. Always fun to talk about ultrarunning with other runners who are passionate about the sport!

The next morning after a hearty breakfast and a mellow 4.5M jog H-Dub and I got back in the car. 7 hours and a few thousand calories later we arrived back at the Fort.
Posted by burch at 2:28 PM 10 comments:

Final race before fun on the Slickrock!

This Saturday I put in one final short race tune-up before the Dance on the Slickrock in Moab! I drove to Loveland for the Sweetheart Classic 4M. Michael Chavez and Jordan Wilson both of FOCO sped away from the field. Spots 3-6 were much closer together. The race started out with a predominantly downhill first mile aided by a tailwind. I hit this split at 5:30 in 6th place way too easy- the tailwind was launching us down the hill probably in the 15-20 MPH range. Miles 2-4 we encountered the uphills and the now 15-20 MPH HEADWIND. This slowed everyone down and the splits looked like we were all running disastrous races. As usual I started catching up to the second pack of runners as the finish came near. At 3.5 I reeled in Jerry Rief on the last significant uphill that we flew down to start the race initially. This pass was brief as he had some reserve in the tank and then did a slingshot to pass me. Shortly thereafter Jerry and then myself passed a fading Mark Hussey. With less than a 1/4 mile to go I dug in to try to launch a counterattack on Jerry, however he responded beautifully and cruised into the finish 5 ticks faster than me. Another solid effort on a blustery, "hilly" course.

Finally, the ultra season will debut for me and many others this weekend at Moab's Red Hot 50K+ I'm really looking forward to a longer race on some fun trails. It will be a fast year. I'm predicting a new CR and the potential for 5 guys to go sub 4:10. Here's a few to put money on in no particular order: Jones, Parr, Callahan, Bowman, Torrance, Stevenson, Kennard, and more! Last year Callahan, Parr, and myself wanted to do a race together and sweep it 1-2-3 Gunnison. Our schedules never aligned to get all of us at the same race; until now...and the fact that Gunni is no longer mi casa. However, it could go 1-2-3 FOCO...you never know! So for drama and something to talk about I'm calling this race the Gunnison Wrecking Crew vs. The FOCO Fast and Furious! Bring the A game and heed the challenge!!! It will be EPIC!!! The pressure is on!!!

On a personal note, I need to settle the score with Kennard after his smooth stride slid by me in the Quicker Quaker! Rumor has it he's been cruising by Tony in training! He's the Dark Horse to watch! I need some redemption!!! Round 2 awaits...!
Posted by burch at 6:22 PM 5 comments:

Well it's official! On February 1st Montrail announced its Trail Team for 2011. Check it out here I am thrilled to run for a company that makes great shoes and gear and actively promotes the sport of trail/ultrarunning. It is quite the honor to be recognized doing the thing that brings me to life each day! I had to let it soak in for a week before sharing! I am looking forward to this year of racing more than any other- the drive, focus, and discipline are continuing to build. I am STOKED to make myself a better overall runner- in the mountains and on the road! My mantra for 2011 is: CHOOSE TO IMPROVE! Each day we have that opportunity- go get it!

Yesterday I ran the Superbowl 5K in Greeley. The fitness is coming along. I ran a 17:26, 3 seconds off my PR, two days after running a 27 miler. Really getting excited to race longer in Moab! Below are a few pics of some of the Montrail team from last year: Dakota on his way to a CR at Fruita 50 and Henshaw on his way to a CR at CP50. And some characters from FOCO! 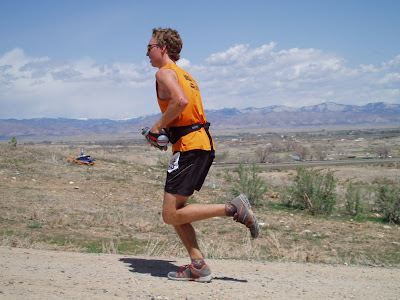 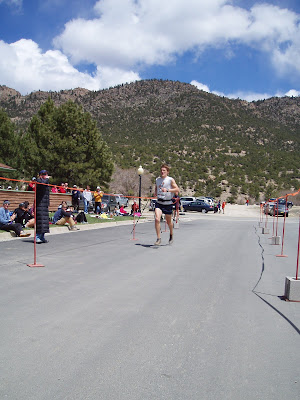 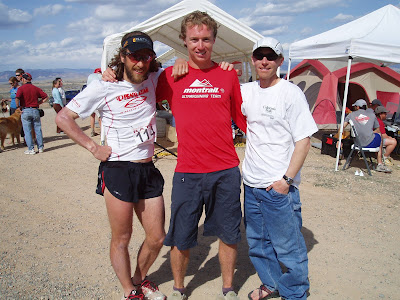