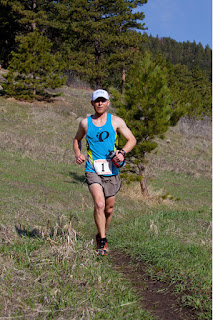 Needless to say I wasn't brimming with confidence coming into QR. I had been watching shadows of my former self running effortlessly on the walls while I lay horizontal in the fatigue cave. On the couch, feet off the ground, wondering what my deal was. Was QR going to turn into another second half 25 mile death march like Sonoma? These were some of my thoughts leading up to race. Here's what it looked like on paper since Sonoma:

Went to bed early on QR eve. Woke up unsure of how the race would pan out. Drove to the race with the jams going LOUD! Singing along full throttle was a HUGE boost to my energy and spirit. It wasn't Aldean or Church that saved my race...it was Shelton! "Small Town Big Time Night" got me ready to roll! Whew! Disaster averted. 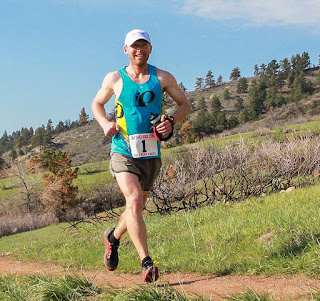 The race started and we rolled out comfortably on the road catching up with those we knew and figuring out who was who from those we didn't. On the first descent down Spring Creek I was enjoying the home trails and moved past Arthur, Briney, and then Aish to take a brief (any my only) lead of the day. Aish and I struck up a bit of conversation about his NZ homeland shortly before we hit the Horsetooth AS. From here out the race was on! As we headed up Southridge I watched Aish, Briney, Arthur, and Hamilton float up the second climb of the day as I took it somewhat conservative as I thought about the remaining 4 we still had to ascend. 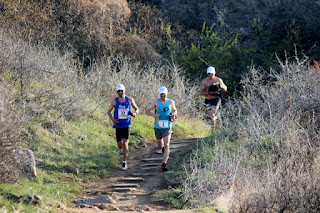 Aish and I dropping into Horsetooth AS Photo: N. Peterson

From Southridge I ran solo all the way to the Timber Trail descent where I went by Briney on the steeper pitches before the bridge. I hit the turn in 3:39 (3:36 in 2012) and soldiered on. The temp was warming and the climbs were feeling tougher. I was mentally preparing for my rematch with the crux climb up Mill Creek. Last year it kicked my butt. This year I took it easy not letting the heart rate skyrocket as much. More intentional hiking on the steeps...maybe I went too easy. I got to the top where I surprisingly saw Aish in a chair at the AS. He apparently took a brief detour off course descending Arthur's Rock Trail. Instead of following the named trail to the AS he went left on Overlook. During this time Arthur unknowingly took the lead and began his Mill Creek ascent. Aish then went beast mode to catch up to Arthur and was stopped short by the accumulation of lactic acid by the time he got to the top. 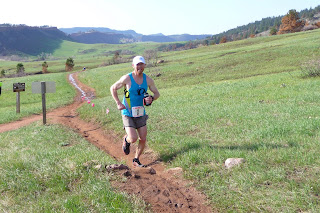 I got knews that Hamilton was only a few minutes in front of me and was looking rough. I figured keep it steady and I'll catch him within the hour. I passed by the oncoming masses ascending Horsetooth as I made my way down with no sign of Hamilton. Once I got to the Horsetooth AS Erskine gave me the status, "Kiss your course record good bye, Arthur is looking STRONG!" "Hamilton is only two minutes ahead and looking rough, you've got 2nd!" I went up Spring Creek and never got a visual on Hamilton. Same thing at Mill Creek AS. "He's only 2 minutes ahead and looks ROUGH!" 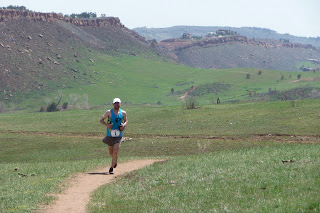 I bombed down Towers and had my first Goding sighting of the year. "There you are" said Goding in a very relaxing yet reassuring way. Goding revealed the truth. "You're not even close to 2nd. Just keep doing what you're doing. Stay in the present moment. Be the trail. You'll run faster when you stop running. All we are is dust in the wind. Grasshopper." (Disclaimer: only the first quote is legit, the others are what I heard after 7 hours of running) 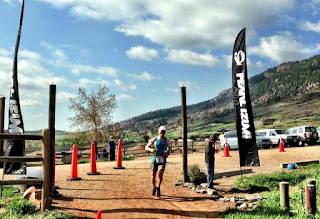 Once I hit the valley I cruised to the finish; mistiming my kick by 22 seconds to finish in 8:00:21. (4:21 second lap, 4:04 in 2012). Another awesome post race and successful event beautifully directed by Pete and Nick and the INCREDIBLE ARMY OF AWESOME VOLUNTEERS!!! Congrats to King Arthur for making it 3 in a row! On his first pass of Arthur's Rock he grabbed the sword and never looked back! Shelby Berg- awesome job on your first 50! No DFL...keep rockin!

Since last year's inaugural running the Quad Rock course has survived two wildfires. On Saturday the second running will see a longer/different course (fire related), a deeper field, and a prettier purse. Here's a look at who's gunning to be one of the Hot Shots:

Michael Aish- Ran in the 2000 and 2004 Olympic Games for NZ in the 10K and 5K. 4 Time All-American at Western State with individual titles in '99 and '01. He's 2 for 2 at winning the 50 milers he's entered. Even with limited Ultra experience it's tough to bet against this level of ability.

Trent Briney- 3 Time Olympic Marathon Trials Participant with a 26.2 PR of 2:12! One of the fastest times ever at JFK 50 with a 5:37. Was 2nd at the Crown King Scramble 50K in AZ this year. Another raw talent who's familiar with racing the top competition this country has to offer.

Josh Arthur- new to the Ultra scene with a few results under his belt. Was 2nd at Cascade Crest 100 in 2012, his first time at the distance. Has two 50 M finishes, nothing electric. What stands out is his 2013 campaign with wins at Salida and Fruita marathons. Look for him to flip the switch this weekend.

Karl Meltzer- He's running super smooth this year. 4th at Bandera, 5th at Moab, 1st at Antelope Island 100 with a 14:34! A deceptive 14th at the uber competitive Lake Sonoma last month. I have a feeling things are setting up nicely to challenge Clark's WS/HR record. This may be the perfect tune up he needs.

Ryan Burch- the defending champ had a solid start to '13 taking 3rd at Moab and 5th at Salida. A sub-par performance at Lake Sonoma increased the fatigue he had been experiencing. It was an interesting last month to say the least. The ball could bounce either way on this one. However, home field advantage rules in his favor. The friendly confines of his backyard trails hope to give him that spark.

Jim Rebenack- the 2012 silver medalist was 7th at Chuckanut this year. It's amazing how much this guy flies under the radar. Watch him move through the pack in stealth mode once again.

Jason Koop- took the bronze after racing a ton before Quad Rock last year. This year he only has a 50K under his belt. Will the fresh legs speed his steps this year?

Paul Terranova- Having a great '13! 3rd at Bandera, 2nd at Nueces, 1st at Hells Hills, 1st at Squawk Mtn. He knows the course and looks to make an impression this weekend.

Troy Howard- 1st at the Destin Beach 50K in February. Tons of experience.

David Ruttum- he's my sleeper of the bunch. Went sub 7 hours at the Leadville 50 and ran a 7:01 at Collegiate Peaks in the past. Will be interesting to see where he lands on Saturday but he may quietly surprise a few.

Sam "Man of the Hour on Towers" Malmberg- No one has been faster than this guy on one part of the course. 13th at Moab this year. I really want him to have a break out 50M performance and turn some heads. Will it be this weekend or at Pikes Peak 2014? Why not now.

Who will be the new Queen? A quick look at the ladies field:

Kerrie Bruxvoort- 1st at Zane Grey. I'm picking her for the W.

Anita Ortiz- has the pedigree. No results in 13.

Becky Wheeler- no results in 13.

Kristel Liddle- the hometown girl was 4th last year. Looking to make some noise this year, she's 2 for 2 taking gold in both her races with a CR at Antelope Island 100M.