Grindin' it out at Pocatello 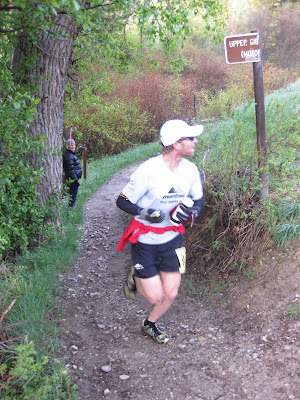 The short of it: Had an awesome road trip to Idaho with friends, met a lot of cool people, ran a SWEET course, legs were flat as a pancake for this one.

First, another STUNNING performance by Montrail teammate Young Money (8:17) who finished 1st and collected a cool $500 for his effort. Wouldn't it be nice to make $10 bucks and change for each mile you run in a race? Second, congrats to Zach Miller (8:24) and Mike Foote (8:40) on their IMPRESSIVE finishes and rounding out a SOLID podium. Third, well done Team Montrai! Alongside Dakota, Joelle Vaught (9:31) won the women's crown convincingly, over 90 minutes ahead of Hardrock champ Diana Finkel. Montrail athletes earned 4 of the top 10 spots: 1-Jones, 4-Burch, 7-Hart, 8-Vaught! Fourth, well done road trip team! Doug Newton (one of the toughest men on earth) ran 11:38! BTW he ran Jemez the weekend before in 11:19! Two of the toughest 50's in back to back weekends- not too shabby for an old man :) His wife Kirstin Nelson ran a strong race in the 20 miler. Last but not least, Fort Collins local Aaron Marks got the job done in 13:01 for his 3rd 50 mile finish! Did you know that the night before the race he UPGRADED from the 50K to the 53M...way to go big! Fifth, great to share stories/laugh/chat with: Evan H, Luke N, Christian J, Jeremy H, Jason H, Bryon P, Bill G, Paul G, and many others! Sixth, I would HIGHLY recommend this race to anyone looking for a stout 50M with a variety of terrain during a turbulent time of the year. If you like the tough and dirty mountain races like Lake City or Jemez- do this one! Hardrock champ and RD Jared Campbell has it dialed. Jared and his team have faced more weather related adversity and challenging decisions than most RD's might see in a decade. Bottom line- they put on a great event and are prepared for it all.

As for me, it wasn't my day. I led the first 6 miles or so with DJ Money one step behind. After my sunglasses fell off my hat for the second time (I then put them on for the rest of the day) I stepped aside and had DJ take the lead- and that he did! He was within eyesight for the next four miles as I knew it was going to be a grind. Sometimes the three week window between ultras works well, other times it backfires. Worked great for DJ, not so grand for this old man! On the knife ridge climb I was passed by Luke Nelson, Mike Foote, and Zach Miller. At the plateau top I passed them and began the descent to City Creek TH. I knew it wasn't my day when the downhills weren't keeping me in the race. A few miles before City Creek Zach passed me on the downs like I was standing still; he was charging hard after Dakota looking strong and focused! On the Barkleyesque climb up a stream drainage Luke and Mike passed me. I passed Luke a few miles later and could barely see Mike minutes ahead. The climb up Scout Mtn was fun. Charging through mud, water, rocks, and then a few miles of slushy snow to the Famous AS where Roch and Karl were keeping all the runners fed and happy. I downed a bunch of peanut butter filled pretzels and washed them down with about 6 dixie cups of chicken broth. A few miles down the trail I remembered that I am vegetarian this year...woops!
Although I didn't have the mojo I kept grindin' it out. Mentally I felt amazing, fueling was brilliant, just no pow or zip in the legs. This was a great character building race. I knew I gave it all I had on race day despite being out of the race for the podium with sluggish stumps. I pulled into the AS at 45.6 at 7:37 with 7.4 to go. I knew I was moving slow but really wanted to break 9 hours. Got some Cheetos and started plugging away. The theme of the day remained constant- it took me 1:24:32 to cross the line-93 seconds too long to get it done! Nonetheless, I really enjoyed the course and will come back for some redemption and run a time I know I'm capable of.

The proof is in the pudding:

Not the race I wanted before WS. I took the last two days off from running. Starting tomorrow I have 25 days to rebound. Last time this happened was Hardrock 2009 where I DNF'd. This left me with some angst to race again so I signed up for the Leadville 50 that was 3 weeks later. I won it and set a then CR...gotta stay optimistic! Embrace the adversity...

On a side note I had a splendid time in the "banana peel" mud at Pocatello. The trail was "trench warfare" with each step!
Check out Jared Campbell's pics from the race.
Posted by burch at 10:15 AM 5 comments:

Well, it looks like Pocatello will be another weather adventure for 2011! I just checked the reports a few minutes ago: 38-58 degrees, 30% chance of precip, 10-15 MPH winds, a possible 1/2 inch of snow Friday night. You gotta love running in the mountains to sign up for this one. Last year it was cancelled after 50K because of epic blizzard conditions. This year the Portneuf Mtns near Pocatello are 200% above normal snowpack. Because of this factor the 2011 course has a rerouted 3rd leg- similar elevation gain and loss- but at lower elevation to reduce the amount of postholing. RD Jared Campbell said the regular 3rd leg is better suited for Rando racing right now! It's tough to imagine it being crazier than last year or the epic 2009 blizzard at Lake City. With that said, I will PROBABLY start the race with more than a shirt and shorts :) Expect the worst, hope for the best!

I'm really excited to run this year and compare the difficulty at Pocatello to that of Lake City and Jemez. With 12K of climb and descent mixed in with mud, postholing, stream crossings and more it should be a gem! Here's a recent update from the website. And a look at the other adventure seekers. With $500. up for grabs it should be a fast one.

Since Collegiate Peaks I put in some lower volume (60M) maintenance weeks to shake out some of the sludge and fatigue from CP. The 4 days after racing I felt the best I ever had after a 50M. Then I got hit with some fatigue- general tiredness with normal runs feeling tougher than usual. My long runs were 16 and 18 each week-nothing fancy-mellow pace-solid elevation gain. The goal is to stay healthy (check), and get to the start line with a little more spring in my step (TBD). Nonetheless, excited to run in some new mtns, have an adventure, and bring home the stories and memories that make this sport what it is.

Finally, congrats to my friend from across the pond (Horsetooth Reservoir) Senor Nick "Flash the 2nd" Clark who ran splendidly to a new CR at Jemez! In a post race interview he mentioned there were no "niggles", the "pistons" were firing properly, and before his meal he was a bit "peckish." More here! Gotta love the accent and complimentary vocab! CAN'T WAIT until his DVD hits the shelves!
Posted by burch at 3:29 PM 3 comments: 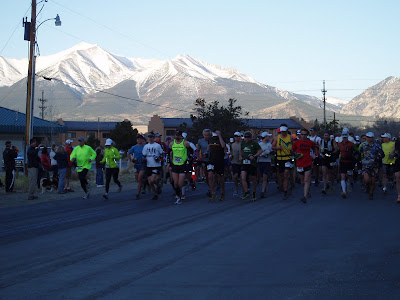 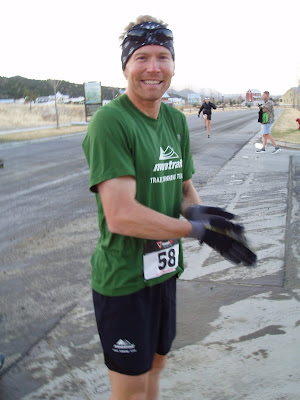 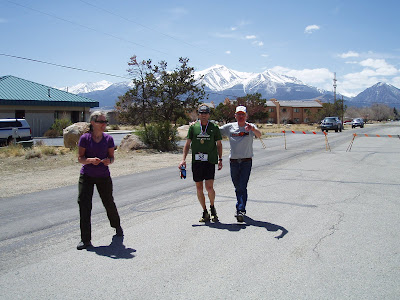 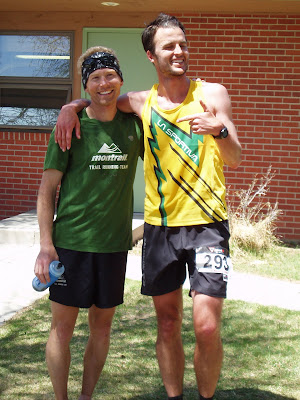 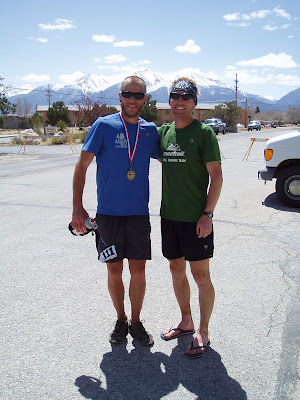 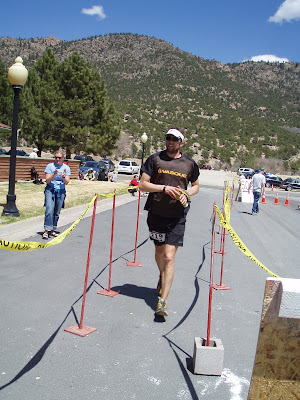 6:39 was the time that appeared during a number of my training runs leading up to the Collegiate Peaks 50 miler. I had been feeling good and looking forward to a solid race. One year ago I sandwiched the CPTR 25M between Fruita and Jemez to preview the course for a future run at the 50 miler. Thus, I knew what to look forward to!

One of my goals was to go sub 7 on Saturday. Looking at the entrants list I believed the winner would set a new CR. Duncan was looking strong 3 weeks after a solid win in Fruita. Dylan has hit a new level in his running. This was made even more evident at Antelope Island in March when he demolished my old CR by 16 minutes! Corey Hanson has steadily improved his performances this year and ran to a 50M PR at Fruita finishing second to Duncan. Sub 7 was one of my goals with that 6:39 continuing to surface in my thoughts.

As the race started I settled in with DC a few steps behind Dylan. After the pavement warmup we hit the smooth, sandy, dirt jeep roads that make up the bulk of the course. Through 18 miles Dylan and I exchanged the lead numerous times. I needed to lengthen my stride on the downs while he glided on the flats. This was textbook to our race in Moab where we finished within 3 minutes of each other. At the 18 AS he took an extra cup of drink while I continued on. From this point in the course is basically 7 miles of cruiser downhill/flat to the turnaround.

I finished the first lap in 3:08. Only 3 minutes slower than last year and I was going double the distance! It felt good- I knew I had cruised the downs and was running smooth. Dylan came in 90 seconds after me. I knew if I stayed consistent one or both of us would go under the record. Despite him being relatively close I never got a visual of Dylan and ran the second lap by myself thinking he was within striking distance. I stayed consistent on pace and fueling and was ironically looking forward to the last stretch of pavement! Once I hit the homestretch I got into the American River rhythm and clicked off the final miles finishing in 6:37. Showcased by the funny looking burn between the top of my sunglasses and the bottom of my bandanna, the sun shined on me this day. So where did that 6:39 come from?

Fuel: 4 packs of Clif Bloks, 1 Chocolate Cherry Clif Shot, 5 Nuun tablets, 1-2 cups of Coke at each AS during lap 2