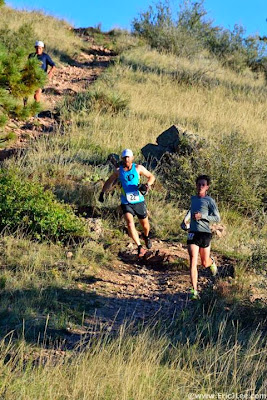 Been a long time since I rock n' roll'd. It was great to get back on the trails and race this past Sunday at the Bluesky Marathon. Coincidentally, it almost did not happen. Returning back to regular running over the past two weeks has been a much more difficult transition than the experience I had a year ago. In 2012 I went to Basic Training, hardly ran, came back, seamlessly returned to training, and won Bluesky. Fairytaleesque. 2013 I completed Firefighter Academy in TX, ran 15-25 miles/week, came back, the body rebelled to training, and I was 19 minutes slower at Bluesky.

The day before the race I celebrated my B-Day and reflected on the past year. Despite running more in TX I was not into it. Monday through Friday my options were the track or treadmill. On the weekend I could run around base if I found someone to join me. Thankfully there were two guys that enjoyed seeing more than the oval so we would get out for one of the days off. I saw way too much of that track over my four month stint. Lanes 7-8 showcased dead baby scorpions that did not scurry fast enough to make it home to the surrounding rocks. The things you notice when you run in circles day after day.

Coming home I was once again refreshed to hit the dirt. My first run was Towers. BUT the 1700 feet of climbing in that run was more vert than my four months in TX combined. My calves hated me. Super tight. Hobblin' around OMB style. Coming back to the dry climate my feet cracked and split. My lower back ached. My body was out of sorts and I was a mess. I managed to put in a 60 mile week during my first full week back. Topped it off with a 12 mile long run. My longest run since Quad Rock 50 in May. Was I really gonna race Bluesky? This is the question I asked myself many times on Saturday night and race morning.

What would you pick in my situation? I could have stayed up all night, had a Breaking Bad marathon, and then showed up and volunteered at the race. Or I could run a marathon on a rusty set of wheels and get an intimate look at my off the couch fitness. I hoped it wouldn't be a disaster; but I really wanted to get through Season 2! In the end I compromised and stayed up until midnight watching Walter White's web weave itself through the ABQ. When the alarm went off at 5AM I almost ditched the race once again...funny what goes on between the ears.

The race started and I felt great! Until I started the grind up Towers. Ugh. The short of my race report was my legs ached for 20 miles and were super heavy. I ran steady eddy all day passing 3-4 runners during the return from Devil's Backbone. Definitely glad I chose to race and establish a base to grow on as I move forward with the necessary consistency that's been lacking.

Last but not least... Congrats to locals: Nick Davis, Justin Liddle, Sam Malmberg, and Corey Hanson who raced up front all day; each setting PR's at Bluesky in the process, awesome!