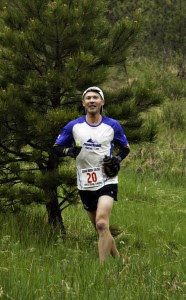 The day started early. 3:30 AM to be exact. Stefanovic rolled in shortly before 4 and minutes later we were headed to the start serenaded by The Bear. I slept great and was wide awake despite the o'dark thirty morning. After pinning the bib I did my typical wavering on race wear. Since Mother's Day was soon to be I thought of my mom and added gloves and arm warmers. Thanks mom!

Toeing the line is always a good time. You get a few minutes to say hi to the existing friends and meet a few new ones. I was really glad that Riddle and Rydman and any runner new to these trails could make the trip. I love running in Lory and Horsetooth and sharing these trails with others who are experiencing them for the first time.

The race started and we were off. I soon settled in with Crandall, B. Goding, and Malmberg. Half way up the first climb as we gained the Stout Trail, D. Goding and Riddle joined the party. No one would have guessed but Dan Goding has been battling injury and had only run once in the past two weeks leading up to the race. He won the 25 miler! Anyhow, up Towers we climbed and down Spring Creek we descended.

Arriving at the Horsetooth AS DBO provided live Transvulcania updates. How cool is that! I'm running through the AS, filling my bottle, and learning that DJ Money just shocked the world! I wonder if B. Powell was giving him and Kilian QR50 updates? Most likely I'm sure! 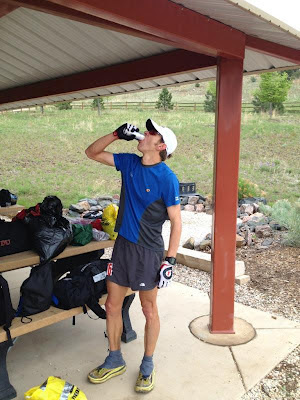 Then it was up Horsetooth and across Westridge. I caught up to a younger guy who was running the fastest I've ever seen anybody run in Five Fingers on technical trail. Soon it was down Mill Creek and I caught up to the Wise Sage and Fan Favorite. Fast forward a bit and I finished my first lap in 3:36. Marks and Funk resupplied me and it was time for Round 2!

Back up Timber I was running well. I had a 10 minute lead starting the second lap. It was great seeing so many familiar encouraging faces as I ran against the traffic. Descending Howard was its usual fun and soon I was at Arthurs Aid with a sense of dread beginning to set in. I had already begun to think about the climb up Mill Creek. This was one of the game changing points on the course and I knew I was in for a grunt.

The Mill climb started out o.k. Then I began to encounter the low point of my race. First I began steadily slowing down as I ran. Then I shuffled. Followed by power hiking. Trumped by hiking. And finishing with a peppy walk. My legs were powerless. I was dizzy and thought I might faint at times. Such an awesome place to be when you're half way up the climb! I kept moving at my scorching clip and eventually made it to the Towers Aid. I must have looked terrible because no one said a word as I stumbled in. This climb alone cut my lead in half.

Two cokes later I began the Westridge traverse. The legs were getting a bit crampy on the climbs. After muscling through the roundabout traverse I was pointed downhill on the HTR Trail. Once I hit Southridge I was cranking. Miles later and a quick stop at the Horsetooth Aid, DBo informed me I had a 7 minute lead. It was time to keep truckin and finish it out. As I descended the single track to the base of Spring Creek I could see Rebenack charging down Southridge. The lead had to be only 5 minutes.

Spring Creek was my redemption climb. I rebounded after my Mill Creek melee and ran 90% of this one. Soon enough I was at the top downing two cokes before the downhill bomb on Towers Road. This was by far the fastest I have ever descended Towers. The moisture gave the road added tack for extra control and traction. Gone was the usual dust and loose top layer. The Stout traverse came and went followed by the technical Sawmill drop. Now I was in the valley. No more trees to hide in and fully exposed to the hungry hawk eyes of Rebenack and Co. My goal at this point was to crest the ridge at Arthurs Aid without being seen.

Once I made the crest BG gave me the thumbs up and verbal confirmation, "No one is in sight, don't worry about a thing." From here it was 2 miles and change to the Finish. I put it in cruise control and enjoyed my valley tour home. 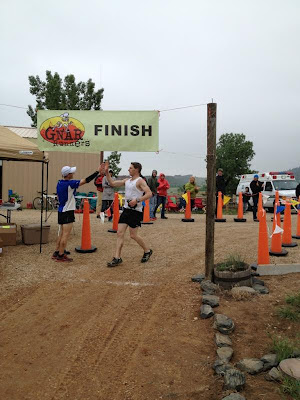 Rebenack finish. On my tail all day! Photo: Eric Lee

Looking at the fog all day made me think about Gorillas in the Mist. Jane Goodall enjoyed her first ultra. I was supremely relieved that I won. Anything less than 1st would have seen TNCRD lose his house. Dana and the kids would have been pissed. Felt like I made the world a better place with this run.

Joking aside it was a flawlessly organized race. Awesome job by Pete and Nick. They directed an inaugural race that was planned out like it had been going on for years. A huge thanks to their army of volunteers and everyone at FCTR for their cheers, support, and all around positivity.

Streaks! Still alive is my undefeated record in ultras in the backyard! Still alive is winning ultras in the Bajadas! And 2012 marks the 5th consecutive year with a 50 mile win! It's always fun to include the most random streaks/FKT's you can think of to inspire and propel your training to the next level. What are your current streaks?
Posted by burch at 10:46 PM