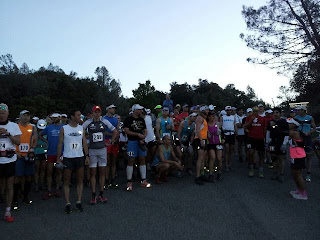 Getting ready to start! Photo: Montrail

Oy babushka! This one didn't go as planned. Here's the text that I sent to family and friends post race: Tough day! hour off goal time. legs dead from the start. cramp mgmt the last 12 miles. lovin life now- great people, food & drinks. thx 4 all the support!
I'm finding it's much easier to blog about my races that don't go as well. Take Moab and Salida this year. Went to race, had fun, did well, went home. Not very exciting or personable is it? Lake Sonoma was a little different.

My week leading up to the race was sick! Quite literally. Monday-sick. Tuesday-sick. Wednesday-8 miles. Thursday-9.6 miles. Friday-3.5 miles. Each of these runs I was lethargic and slow. Nonetheless I was optimistic thinking about the race. I was feeling much better than Monday and Tuesday and I had put in some great training after Salida. Or was it a bit too much too close to Sonoma?

After Salida I put in a 60 mile recovery week. Then I put in a 90 mile week. I topped this with a 106 mile week. 99 of these miles were run in HTMP culminating with a 30 miler that Saturday. My taper week was a more than needed 85 miles but I was simply having too much fun...woops! That Sunday I ran a mellow 7 miler and felt worked. The next week is outlined above. I'd say my result was a combination of recovering from being sick and simply enjoying what I enjoy...which made me a bit tired on race day. 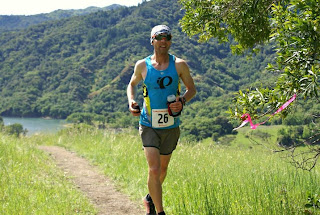 Coming into an AS. Photo: Maria S.

It was awesome to escape the snow a few days and run in shorts and a tee. Great to see a new place and hang with so many runners I rarely get to see outside of races. Friday afternoon a large group of us toured the last few miles of the course to visualize the homestretch. Despite eight hours of shuteye I woke up race morning feeling tired.

The race started and immediately 40 people shot off in front of me. I knew within those first few miles I was in for a long day. I've experienced this at a number of races- States, Leadville, Pocatello, etc. I knew it was going to be a grind. The first half of the race I was able to fake the fatigue. I cruised to the turn in 3:26 (8:15's)...knowing the return was going to be much more arduous. 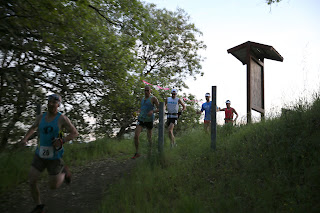 The second half started along with the shufflin'. Shortly after the AS at 30 miles runners began to pass me. Topher, Victor, and a few others. Aerobically I was fine. The breakdown was purely muscular. No pow, no zip, no nothin. I continued my solo jog until mile 38 where I somehow had caught up to Victor at the AS. He decided to pace along with me for a few miles. Other than 5-6 miles with him I ran solo all day. Cassie cruised by us around mile 44, Victor attempted to pace with her while I knew what was in store for me. The last twelve I could have cramped up at any time. The footwork was tedious. I really had to focus on taking perfect steps to avoid cramping my quad, calf, and hammy. Total lower body convulsion management. That was the game I played. (The second half I averaged an 11 minute per mile shuffle). And I won by making it cramp free to the glorious finish line! Oy babushka!

And then I cramped up trying to untie my shoes and changing into my jeans. It was so awesome! Foot cramps are the best. After the 30 minute ordeal of changing clothes while cramping I made it back to the post race. Tamales, cold bevs, foldable chairs, and friendly faces all smiled at me in unison. The run was done. Time to talk, laugh, eat, drink, and enjoy the sunshine and 70 degrees.

Sonoma showcased the great community between runners within the sport. So much positivity surrounded the event. Despite my tough day on the trails I have nothing but fond memories laughing, talking, and hanging out with so many fun friends. 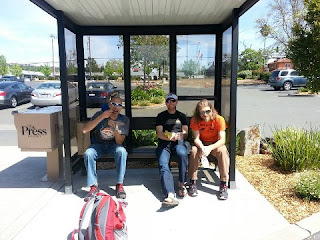