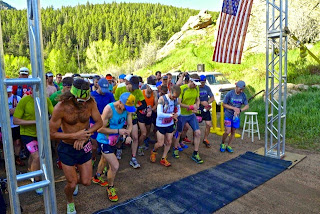 "I don't usually go off course, but when I do it's for at least 11 miles." The Most Interesting Man in the World whispered these fine words into my ear as I prepared to start the Golden Gate Dirty Thirty 50K for a second time last Saturday. How in the heck did I run 11 miles to find myself back at the Start/Finish area approximately 1:45 into the race? Well, let me tell you.

***DISCLAIMER*** I ran this race in 2012. Which means I should know where the heck to go. However, I did go off course that year as well!

It must have been the zero dark thirty wakeup. At 3:10AM I got the body vertical. By 3:29AM I departed in the Fifty for the meandering trails of Golden Gate State Park. Driving up the tight twisting Golden Gate Canyon Road I almost hit him. Sasquatch lumbered across the road looking as tired as I felt. He must have slept terribly too. I felt sad for the hermetic beast who has eluded countless hunters and scientists for the past 100 years. As the brakes locked down and tires screeched I made eye contact with the living legend. Deep turquoise pools set beneath a furrowed brow looked inside of me. This was going to be a day to remember.

As a tribute to my sighting I donned my PI turquoise singlet and boarded the shuttle bus for the final miles to the race start. No one believed my story as I zealously described what I had witnessed 30 minutes earlier. I was frustrated and upset. Why doesn't the world believe in Bigfoot? As I applied the sunscreen and waited in line for the john I mulled over what I must do. Prove it. Race be damned I had a new mission.

I lined up for the start like I've done dozens of times. Game on. It was the Search for Sasquatch. The race started and we were off. No sign of him yet. I stayed close to the front to make sure I had a perfect vantage point if anything were to happen. As we approached the creek I saw them. Truly remarkable. Twenty four inch footprints perfectly cast into the thick mud. I was on course and hot on his trail. Approaching the first aid station I was in third. As I got closer all I saw was wide eyes and pale faces. The volunteers simply pointed. I knew they had seen him. Chasing down a sasquatch is not an easy task so I made sure to fill my bottle and grab a few extra gels. I continued on and then veered left at the post. 4th and 5th came with me. They must have seen him too and knew this quest was much more important than their finishing place in a race.

There he was! I could believe it because I saw all the evidence. The prints in the mud. The tuft of hair in the post. If I quickened my pace I would catch him in a few minutes. I was committed. With each step I grew closer. In my excitement I had separated from 4th and 5th and was on my own in this journey. The gap was shrinking. I began to panic. What would I do once I caught up to The Bigfoot!? He could totally crush me. Let's crunch the numbers: 68 inches, 145 pounds vs. 108 inches, 503 pounds. Why didn't I think of that earlier? As with most Sasquatch Searchers I got caught up in the chase. It's a fever that spreads like wildfire in your thinking. Rational thought gets chucked aside and replaced with youthful abandon that lives simply in the present moment.

I came back to my senses and hit the brakes. Bigfoot stood 10 feet in front of me. I took a deep breath, regained my composure, and soaked in what I saw. The mythical creature leaned against a tree and began to speak,